A small island in a river. It is usually used to describe to islands found on the River Thames and its tributaries in England. Aits are typically formed by the deposition of sediment in the water, which accumulates over a period of time. Wikipedia

“Anyone living along the River Thames upstream of London as far as about Windsor or Reading will know the word eyot, as it’s commonly used in the names of the little islands that dot the river in those reaches. ” World Wide Words 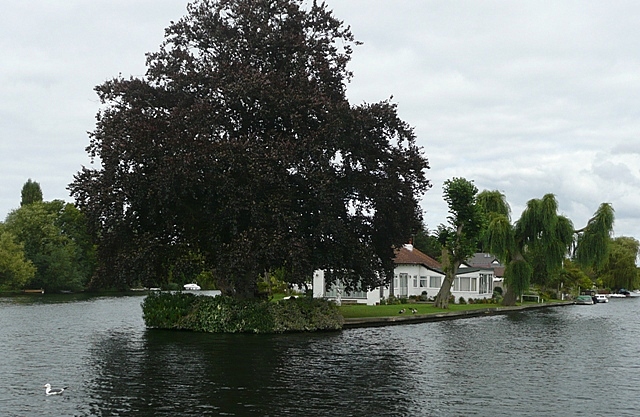 Pharaoh’s Island “One of the many mid-stream aits or islands, that have houses on them. There are about 20 on Pharaoh’s Island, cut off from the mainland except by boat and very vulnerable to flooding as can be seen here.” © Copyright Graham Horn and licensed for reuse under Creative Commons Licence. Geograph

A term used in the UK to refer specifically to woodland dating back to 1600 or before in England and Wales (or 1750 in Scotland). Before this, planting of new woodland was uncommon, so a wood present in 1600 was likely to have developed naturally. It is considered the last remaining link with the original wooded landscape, which covered the British Isles after the last Ice Age. An ayre is a body of water divided from the sea by a narrow bar of land. They are Ayres are most commonly associated with the Northern Isles (Orkney Islands & Shetland Islands) of Scotland.The term is derived from an Old Norse (gravely beach) word used to depict a lake which is only separated by a narrow strip of low lying land from the sea itself. Examples of an ayre include Vasa Loch and Lairo Water on Shapinsay in the Orkney Islands. (Masters, 1840). An ayre is soemtimes used interchangeably for the tombolo associated with the narrow strip of land. (Metcalfe, 1896) . Adapted from Wikipedia

The Ayre of Cara (ND478949) on the east side of Barrier No.4 is the only man-made ayre in Orkney. Ayre (ON Eyrr, a gravelly beach) in Orkney means a sandy or gravelly spit of land enclosing a lagoon, which is open to the sea. Orkney Guide Book