An area of peatland which is formed where there is high rainfall and low levels of evapotranspiration. This allows peat to develop not only in wet hollows but over large expanses of undulating ground. The blanketing of the ground with a variable depth of peat gives the habitat type its name. Blanket bogs are found in the north and west of the UK, extending from Devon in the south to Shetland in the north and in Ireland. In many areas the peat is cultivated as a fossil fuel and used either in electricity generation or domestic solid fuel for heating. In the Republic of Ireland a semi-state owned agency, Bord na Móna, controls much of the country’s blanket bogs and harvests peat for electricity generation. Some blanket bogs are now protected, as the habitat is under threat from extensive harvesting. Examples of protected blanket bogs include Sliabh Beagh and Airds Moss. Wikipedia 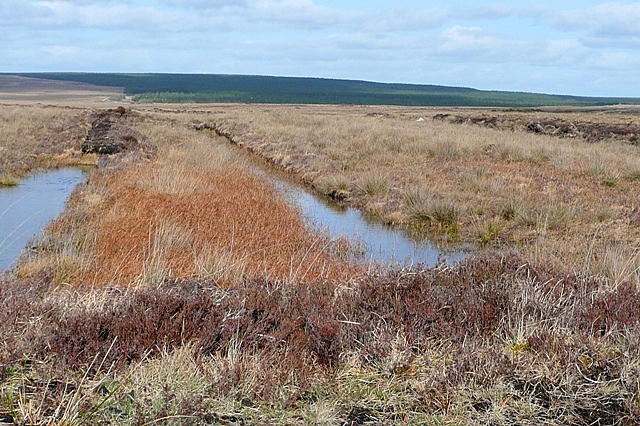 Both Bracháin (Bovroughan) Bog
A section of worked out turf cutting within the blanket bog, leaving channels of water where the cutting has reached. © Copyright Graham Horn and licensed for reuse under Creative Commons Licence. Geograph

“The blanketing of the ground with a variable depth of peat gives the habitat type its name and results in the various morphological types according to their topographical position, e.g. saddle mires, watershed mires, valleyside mires. Raised bogs and mires and fens”. Comprehensive coverage with a full list of sites. Joint Nature Conservation Committee

Native bluebells (Hyacinthoides nonscripta) also known as Wild Hyacinths in Scotland, are one of the Read complete article

In Scotland, North East England and some parts of Ireland and New Zealand, a burn is a name for watercourses from large streams to small rivers (e.g. Bucks Burn, Burn of Elsick, Burn of Pheppie, Burn of Muchalls, Ouseburn, Seaton Burn) Images here. In archaic English “bourne” is retained in placenames like Bournemouth and Broxbourne. The word comes originally from the Northumbrian Old English from where it went into Scots. Wikipedia