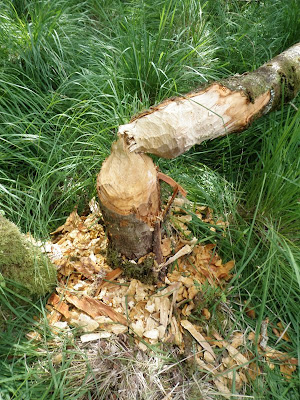 As widely reported, after an absence of 400 years, a group of beavers were returned to the wild in Scotland this year in Scotland.  Here’s around-up the latest news.

The latest news on the trial from the official site. Note The above photo is taken from the project’s beaver blog, which is also worth checking out for developments.

Three beaver families were released at carefully selected sites in Knapdale Forest, Mid-Argyll, and observation and tracking began immediately. A family of four was released into Loch Coille Bharr, a family of four into Loch Linne and the final family of three was released into Creag Mhor Loch. Unfortunately, shortly after release, a juvenile male from the Loch Linne family died. A post-mortem was carried out by independent veterinary professionals but the results were inconclusive. The family at Loch Coille Bharr and the remaining three animals at Loch Linne settled almost immediately and are regularly observed and tracked by field staff and volunteers. All these animals appear to be in good health.

In another developemnt one of the beavers has disappeared under possibly myterious circumstances: