The freezing  temperatures may have caused the death of thousands of velvet swimming crabs which have been left littering the shoreline in the Thanet area of Kent. So many velvet swimming crabs – or devil crabs, as they are commonly known – have been washed up in Westbrook Bay over the last week that people have struggled in some places to see the sand. More here

The Orwell Diaries is a remarkable blog which publishes George Orwell’s diary entries on the same date 6o years later. The entries are full of fascinating insights into the daily life of the author between  1937 and 1947 and include a surprising amount of observations on natural history. The comments by the readers are also, unusually, interesting. Here is his entry of 11th January from the cold winter of 1940:

No thaw. It would be possible to skate on the church pond, but unfortunately I have no skates here. The other ponds not bearing. Water beetles (the kind whose legs look like oars) can be seen moving about under the ice. When a brick lies in the bottom in shallow water, there appears in the ice above it a curious formation the size & shape of the brick itself, presumably something to do with the temperature of the brick when thrown in being higher than that of the water. Turned up a woodcock in the common lane. No rabbits in the field today. Birds very bold & hungry. Rooks in the vegetable garden, where they do not usually come. One or two primroses & polyanthi budding, in spite of the frost upon them. One of the elm trees apparently bleeds a brown-coloured stuff, sap or something, & large icicles of this hanging down, looking like toffee. Milk when frozen goes into a curious flaky stuff like flaky pastry.

Orwell had an enduring interest in natural history which stemmed from his childhood. In letters from school he wrote about caterpillars and butterflies and he had a keen interest in ornithology. He also enjoyed fishing and shooting rabbits, and conducting experiments as in cooking a hedgehog or shooting down a jackdaw from the Eton roof to dissect it. Wikipedia Defra has released this advice on caring for farm animals and pets during the cold weather, including this note for horse and pet owners:

Where pets (such as rabbits and guinea pigs) are normally kept outside in hutches during mild winters, eowners should consider moving them into garages / sheds to provide additional thermal insulation. Where cages cannot be moved additional protection or insulation should be provided wherever possible.

As with farmed livestock, horses and ponies usually kept outside during the winter should have access to shelter at all times and a regular provision of feed and water ensured. Where such provision is inadequate, owners should consider moving the animals and/or permanently stabling in the interim period Water supplies for all horses and ponies should be checked regularly and alternatives sources supplied if mains failure occurs.

In an emergency you should contact the RSPCA for help and advice. Read their advice on animals in the cold spell here. 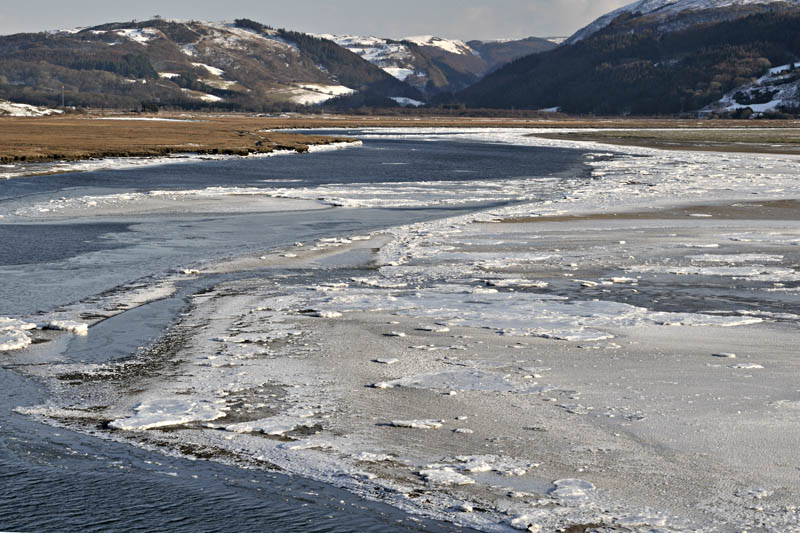 Stunning photo taken on 9/1/10 of the River Dyfi estuary near Aberdfi by John Mason on the UK weather forum (more photos from him), who notes ” ice-floe interacting with a mooring-buoy at Frongoch. The noise was amazing!!“.

Looks more like northern Canada rather than mid Wales.

The Met Office has released this useful advice if you really need to go out in the wilds. They recommend:

…wear several layers of clothing and keep dry to prevent loss of body heat. Watch out for signs of hypothermia — uncontrollable shivering, slow/slurred speech, memory lapse and drowsiness and frostbite — loss of feeling in and pale appearance of fingers, toes, nose and ear lobes. Keep moving your arms and legs to help the blood circulate.” Birds are struggling to survive in the harsh winter conditions but it’s a good opportunity to watch them without having to move from the warmth of a living room.  Those keeping bird tables well stocked and maintaining a supply of unfrozen water have been recompensed by unusual sightings: the RSPB have received several calls about woodcock and snipe visiting gardens.  People who have long dreamt of attracting fieldfares and redwings are  finally being rewarded, as these species lose their habitual shyness.

Competition among birds is fierce, as comments on Birdforum.net reflect.  One poster heard loud screeching in the garden and saw a house sparrow had been plucked from the bird table.   By a sparrowhawk perhaps?  In fact, it was dangling from the bill of a collared dove, who had grabbed it by the wing as they fought over food.  The sparrow managed to struggle free.

Photo of woodcock posted on Flickr by Ian Taylor

Yowie snowshoes were designed, fittingly, in Australia.  They look like beach sandals attached to rubber flippers with a deep hexagonal tread and metal cleats.  Extremely versatile and user-friendly, once you’re strapped in, with body weight nicely spread out to avoid sinking, you can enjoy  snow walks on the flat or more challenging treks up and down mountains.  The material reportedly offers better insulation from the cold than more conventional heavy-duty snowshoes. They are also lighter, cheaper and easier to stow in your ruck sack.

Another idea is to use ice grips – unobtrusive devices you can attach to your usual footwear to radically increase traction on slippery surfaces.

Bored with snowmen? Why not try and take full advantage of the big freeze and build an igloo in your back garden or local park. Instructions here from The Guardian.

The Met Office have published this account of what is causing this freezing start to the year. Basically, our winds in winter (particularly in the last 20 years) normally come from the south-west. This means air travels over the relatively warm Atlantic and so have brought mild conditions to the UK. But for the past three weeks theAtlantic air has been ‘blocked’ and cold air has been flowing down from Greenland or the cold winter landmass of Europe. Scientists call this contrast “warm-ocean cold-land phenomenon”.

The Met also note although the mean UK temperature for December was 2.1 °C, making it the coldest for 14 years and colder than the long-term average for December of 4.2 °C, December was one of only two months in 2009 which had a below-average mean temperature. In the UK, 2009 as a whole was the 14th-warmest on record (since 1914). This above-average temperature trend was reflected globally, with 2009 being the fifth-warmest year on the global record (since 1850).

The tiny hamlet of Altnaharra (Scottish Gaelic: Allt na h-Eirbhe) has been making the news these days as the coldest place in Britain with temperatures dropping as low as -21.6ºC last night. Altnaharra, which means Stream at the boundary wall in Gaelic, also holds the equal absolute equal record for the coldest ever temperatures in the UK (together with Braemar (Aberdeenshire), thanks to its northerly latitude and inland location. On December 30, 1995 the mercury dropped to a parky -27.2ºC. Let’s see if this record is beaten this year…

Wikipedia reports, interestingly, that on the 20th March 2009, Altnaharra was actually the warmest place in the UK, recording 18.5°C. This was the weather station’s warmest recorded March temperature, and possibly the first time the station had recorded the warmest UK temperature. On the same day, it also recorded the second coldest overnight temperature in the UK, at -3°C, giving an indication of how quickly weather conditions can change in remote areas.

The lowest recorded temperature of the 2010 cold spell was recorded last night in Altnaharra, in the Scottish Highlands, where the levels dropped to -21.6C, almost on a par with the South Pole, where it is currently -22.9C. Altnaharra jointly holds the record for the lowest ever temperature recorded in the UK; -27.2C on 30 December 1995. The previous low this winter was -18C, also in Scotland, recorded the previous night and on 29 December.

The RSPB has warned that British wildlife is facing an emergency in the face of the longest period of freezing weather for almost 28 years and the prospect of it continuing well into next week. Birds are most affected as they are finding it impossible to feed, as the ground and many water bodies are frozen solid.

Mark Avery, the RSPB’s director of conservation described the situation as “a wildlife emergency… The long frozen period is even beginning to resemble the winter of 1962-63, which did more damage to Britain’s birds than anything else in our lifetimes.” At the end of that winter, the coldest in the UK in the 20th century, many populations of common birds such as wrens had plummeted to tiny levels, and rare birds were hit even harder: when spring 1963 came, only 11 pairs of Dartford warblers were left in England.

As a result the RSPB is appealing to people everywhere to put out food for birds in their gardens, but it is also going further: for the first time it is attempting emergency feeding for three rare and recovering species: Dartford warbler, found on heathlands, which will be fed on mealworms left on low-level bird tables in Suffolk and Dorset; the cirl bunting, found on farmland in south Devon, which will be fed on grain; and the bittern, to be fed on sprats. More here from The Independent

Meanwhile The Telegraph reports a remarkable 140% increase in sales of wild bird feed at Tescos as Britons pile their bird table high. And finally the RSPB is calling on everyone who enjoys being out in the countryside to take extra care not to disturb flocks of wildfowl and wading birds, during this exceptionally cold spell. Birdwatch 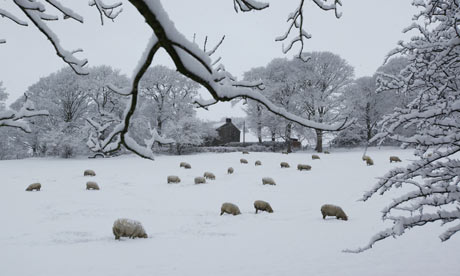