The photojournalist Don McCullin is better known for his work recording war and urban strife around the world, but his more recent work has concentrated more on black and white landscape photography, often taken during the winter in his adopted Somerset . I find them stark, bleak and beautiful.

Don McCullin notes on his love for winter:

I’m probably the only person in England who’s anxious for the winter. As soon as the leaves of autumn start falling from the trees, I become reactivated, the opposite of a hibernating animal. I know that I’ve got four long months of darkness, wind and cold to exercise my masochism. The English landscape’s known for its Constable summers but I’m obsessed with photographing it in the dead of winter, at its hardest … I love the winter – not the climate, but the struggle, its abrasiveness, the nakedness of the landscape.

Some of his British landscapes are altogether darker, like this one of West Hartlepool in 1963, though this too tells a story of cold and nakedness. 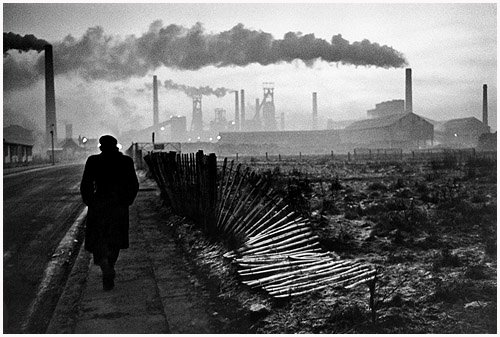 First photo and quote: Towards an Iron Age hill fort, Somerset, 1991 From the National Media Musuem exhibition on his work