The world’s oldest known osprey has just returned for the 20th time to Scotland after completing the 3,000-mile flight from Africa to her summer breeding territory at Loch of the Lowes in Perthshire. Britainnature wishes her a very 25th happy birthday. The bird has already lived three time longer than the average osprey. Her secret? Lots of fresh fish and foreign travel. More in The Independent (Photo by Kevin Hacker)

Amazing pair of images in the Daily Telegraph here of a kestrel and a barn owl’ battling it out over a vole. By wildlife photographer Mark Hancox. 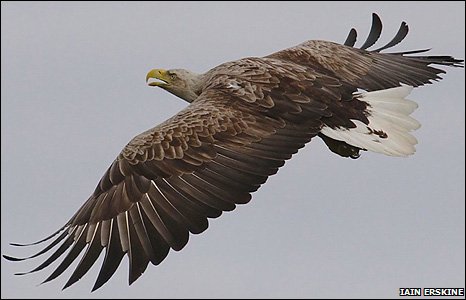 Hen harriers (photo BBC here) have had a disastrous breeding season, and are now on the point of becoming extinct in England, where only a dozen pairs survive, mainly in the northern uplands. Only six nests were successful in total for the whole of England from 12 attempts, with just 15 chicks being raised. The poor breeding season has been blamed on the cold weather last winter which killed off many of their small animal prey. Hen harriers were always going to be vulnerable to a year like this. Their numbers had been reduced to extrememly low figures in recent decades in part due to severe persecution by the gamekeepers of grouse moors, though this year there is little direct evidence of this affecting their failure to breed. Some 800 hen harriers survive in Scotland. END_OF_DOCUMENT_TOKEN_TO_BE_REPLACED

Paragliders will use birds of prey to guide them to the best thermals.  They often report that the birds are not afraid of them and will even approach out of curiosity.  Parahawking takes this one step further.  You’re taken on a tandem paraglider and specially trained birds of prey will accompany you on your flight, rewarded by offerings of food.  This unforgettable experience is available in Wales, organised by the Axis paragliding school

Twenty years after the red kite was reintroduced into Scotland, record numbers of breeding pairs and young have fledged this year. A minimum of 149 pairs have raised 234 young. There are now more red kites in Scotland than at any time in the last 100 years. RSPB

Sea eagles in Britain are associated with the wild sea cliffs of Scotland, where they are being successfully re-introduced. What about the lowland wetlands of Suffolk? The vast wingspan of this magnificent bird of prey was also part of this landscape until the raptors were hunted to extinction in the 19th century. Conservationists are now laying plans to re-introduce the Sea eagle to East Anglia, but with great caution. British Nature and the RSPB are carefully gauging public opinion. The presence of Sea eagles, or White-tailed eagles as they are also known, would be a boost for tourism, but farming and shooting interests will need a lot of persuasion.  RSPB Photograph by Niall Benvie

Two joggers have been attacked and injured by buzzards. According to the RSPB it is most likely that the birds are feeling territorial and are being extra defensive, as July and August is the period when their young will be starting to leave the nests. The Daily Telegraph including photo injured man.

In preparation for this year’s migration, two of the osprey chicks from the Loch Garten nest in the Scottish Highlands are now equipped with satellite tags.  The data will enable their movements to be tracked when they begin their perilous journey south to Africa in August.

For more information about osprey tracking, visit the RSPB
Meanwhile, observe their last weeks in Scotland on the RSPB webcam

In London during Shakespeare’s time, Red Kites snatched food from people’s hands and plucked “lesser linen” left out to dry on hedges.  This was the hey day of the scavenging bird of prey, protected by Royal Decree for helping to clean the city’s stinking streets.  Since then the fortunes of the Red Kite have waned to the brink of extinction but they’re on the rise again, thanks to a hugely successful conservation effort.  And it’s been observed that their underwear-stealing habit is unchanged.  Not only knickers, but crisp packets, gloves and handkerchiefs have been found decorating their nests.  Full story: RSPB