The Sea Birds Preservation Act 1869 was one of the first pieces of parliamentary legislation anywhere in the world to protect wildlife, and the first to offer birds protection on the United Kingdom. The bill came about from a local campaign by local clergy and naturalists to save the birds of Flamborough Head being annually blasted away by hunters and eggs being collected. It introduced a close season from April to August to allow the bird to breed. END_OF_DOCUMENT_TOKEN_TO_BE_REPLACED

Seabirds in the Shetlands have had the best breeding season for a number of years. Ornithologists say the reasons are not clear but must be linked to a plentiful supply of sandeels. Birdwatch

Puffins have has begun their annual migration from Wales to the North Atlantic Ocean after a “record breeding season”. Thousands of birds began leaving Skomer Island in Pembrokeshire last weekend. Skomer is currently home to more than 13,500 puffins – up from 10,000 last year. It is thought puffins, unlike at other sites in the UK, the birds may be doing well because of increased numbers of sandeels. The Daily Telegraph

I wonder if their numbers are being bolstered by refugees from the dwindling Scottish colonies in search of sandeels.

Puffins live to a remarkable age. Scientists on a remote island off the west coast of Scotland have found the two oldest puffins in Europe. They caught Puffin number EB73152, originally ringed on 28 June 1975. At an amazing age of at least 34 years old this bird is now the oldest recorded Puffin in Europe. Birdwatch 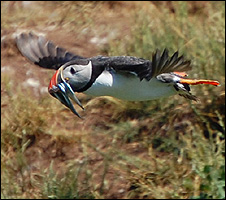 Scientists are fitting puffins with hi-tech tracking tags to try and understand why the number of puffins on the Farne Islands, one of the most important colonies in Britain, has mysteriously dropped by some 30%. Puffin numbers are down from 55,674 in 2003 to 36,500. The Farne Islands are home to the largest puffin colony in England.

Seabird numbers in Scotland fell by 19% between 2000 and 2008, according to a new report. Scottish Natural Heritage (SNH) said the major cause was almost certainly a shortage of food due to a drop in the number of small fish, such as sandeels. If the declines continue, many of Scotland’s famous “seabird cities” could be virtually empty within ten years. Kittiwake numbers have fallen by 40 per cent since 2000 and the shag population that has dropped by 25 per cent. The Arctic skua population has dropped by 57 per cent and the herring gull population has dropped by one third.
BBC

Shearwaters are associated in folklore with death. This undoubtedly comes from their eeirie cooing nocturnal cry like a cackling witch from the underworld.

This Isle of Man web on the Manx Shearwater (Puffinus puffinus) notes:

“A description of their voice on The Isle of Man, in 1731 says this: “The spirit which haunted the coasts have originated in this noise. , described as infernal. The disturbed spirit of a person shipwrecked on a rock adjacent to this coast wanders about it still, and sometimes makes so terrible a yelling that it is heard at an incredible distance. They tell you that houses even shake with it; and that, not only mankind, but all the brute creation within hearing, tremble at the sound. But what serves very much to increase the shock is that, whenever it makes this extraordinary noise, it is a sure prediction of an approaching storm. . . . At other times the spirit cries out only, ” Hoa, hoa, hoa !” with a voice little, if anything, louder than a human one.”

Richard Dawkins cites the Manx Shearwater on page 87 of his book The God Delusion.

One of the cleverer and more mature of my undergraduate contemporaries, who was deeply religious, went camping in the Scottish isles. In the middle of the night he and his girlfriend were woken in their tent by the voice of the devil, Satan himself; there could be no possible doubt: the voice was in every sense diabolical. My friend would never forget this horrifying experience, and it was one of the factors that later drove him to be ordained. My youthful self was impressed by this story, and recounted it to a gathering of zoologists relaxing in the Rose and Crown Inn, Oxford. Two of them happened to be experienced ornithologists, and they roared with laughter. ‘Manx Shearwater!’ they shouted in delighted chorus. One of them added that the diabolical shrieks and cackles of this species have earned it, in various parts of the world and various languages, the local nickname ‘Devil Bird’.

Folklore about shearwaters elsewhere in the world