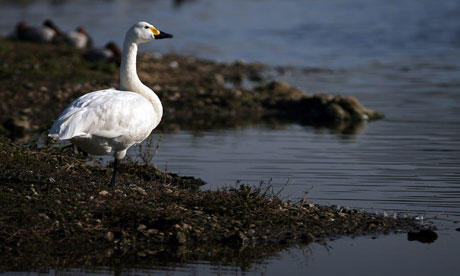 Have you seen Crinkly the wobbly-necked swan?  If you do spot him, please inform the Wildfowl and Wetlands Trust. Despite his apparent handicap, Crinkly is expected to arrive in the UK any day, to spend the winter here with 3,500 or more other Bewick’s swans, an annual event sometimes referred to as a “swan fall”. . BBC

At first light, the sound of huge flocks of honking Pink-footed Geese fills the north Norfolk sky as they fly in from their roosts on the Wash. Back in the 1960s, wintering Pink-foots in the UK numbered about 50,000. Nowadays there are over 200,000 and about half of them are found in Norfolk. END_OF_DOCUMENT_TOKEN_TO_BE_REPLACED

After the successful breeding season of Scotland’s sea birds and an increase, at least temporary, of British butterflies this summer, comes the good news about Bitterns. Their recovery is remarkable because they were close to extinction as recently as 12 years ago. Extensive conservation work in wetland areas has paid off, particularly the restoration of dry reedbeds and creation of wet reedbeds. At least 82 booming males have been recorded in 2009, a high point since their total extinction at the end of the 19th century. Read more at the RSPB. Photo by Andy Hay.

In the Middle Ages cranes were served at royal banquets – along with herons, bitterns and spoonbills.  But as their habitat shrank they disappeared from the menu and from Britain.  Since the early 1980s a small group of cranes has gradually became established in the Norfolk Broads. This year brings fantastic news – juvenile cranes have been seen in Lakenheath Fen nature reserve in Suffolk, which before recent restoration was an area of carrot fields.  The next step in the Great Crane Project is to re-introduce the species to the Somerset Levels.  More at the RSPB