A remarkable photo of bottlenose dolphins off the Welsh coastline playing what could be described as football with jellyfish. Click here to Daily Telegraph to see bigger image and story.

Doggerland is the name given to the vast area that until ten thousand years ago linked the British Isles with Denmark and Northern Germany, a time, Little Britain Eurosceptics please note,  when the Thames was a tributary of the Rhine. Then the ices waned and the inhabited hills, plains, valleys and  forests were flooded. I came across Doggerland listening to this facinating BBC radio 4 documenary. It explores a land lost beneath the waves near Craster on the Northumbrian coast with the help of archaeologists, locals and a storyteller who tells a possible creation myth dating from the 10,000 years ago, as the lands were engulfed. END_OF_DOCUMENT_TOKEN_TO_BE_REPLACED

A world conference on basking sharks in Britain today has announced nature reserves may be set up around the British coast in an attempt to protect the world’s second biggest fish. Worldwide, they are threatened by boat collisions, entanglement in fishing nets and in some parts of the world are hunted for their fins (to be used in shark fin soup).

Proposals for its formal protection in British marine nature reserves are likely to come the conference. Dr Lissa Goodwin, marine policy officer for the Wildlife Trusts, said conservation zones for the species might be included in the marine nature reserves which will be set up around the coasts of Britain under the Marine Bill currently going before parliament.

“There are definite threats to the basking shark in Britain, such as boat collisions and entanglement in nets, but we don’t know what the level of threat is to the population as a whole, so we need to err on the side of caution,” she said.

Thousands of jellyfish measuring up to half a metre in length have been found on beaches in Scotland, thanks to the recent rise in sea temperatures which are currently two degrees above normal. Specimens are growing to their full growth potential. “The hot summer weather has also fuelled the growth of the lion’s mane jellyfish, the largest to visit UK shores. The tentacles of the lion’s mane jellyfish, which is easily identified by its ragged edges, carry a nasty sting which can leave unsuspecting swimmers in pain for hours.” 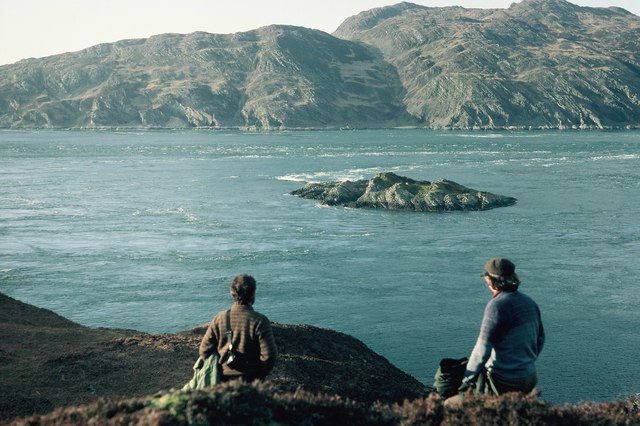 Remarkably the third largest whirlpool in the world, the Corryvreckan whirlpool, lies in Scottish waters. It is located in the narrow strait between the islands of Jura and Scarba. The names comes from the Gaelic, Coirebhreacain meaning “cauldron of the speckled seas. END_OF_DOCUMENT_TOKEN_TO_BE_REPLACED

The Guardian has put together this list of the best whale watching locations in the UK. It mentions the follwoing sites.

I love the unique and lulling cadences of the Shipping Forecast and this sonnet by Seamus Heaney captures its atmosphere perfectly. Read whole poem (BBC)

Scientists have blamed the heatwave for huge shoals of jellyfish appearing in waters around Scotland, including significant numbers of the common moon jellyfish. BBC

Last year in June 2008  saw one of the largest strandings of dolphins ever to be recorded in British waters. Some 60-70 animals were involved, and 26 dolphins were stranded and died in Falmouth Harbour. Listen here to this BBC Radio 4 documentary which looks for explanations to the event.

A massive group of dolphins has been spotted off the Welsh coast. Researchers found their boat surrounded by a pod of around 1,500 dolphins off the coast of Pembrokeshire, one of the largest groups ever recorded in British waters. The lucky conservationists described a “mile-long wall of dolphins….They just kept on END_OF_DOCUMENT_TOKEN_TO_BE_REPLACED

According to the World Society for the Protection of Animals, Norway’s annual hunt of minke whales could cost the Scottish economy up to £15m, and threaten the viability of the whale-watching industry there. The last report on whale-watching in Scotland published in 2001 estimated the industry was worth £7.8m a year, but tour operators have doubled since then from 80 to 165.
BBC