I enjoyed this piece in the Independent…”Mistletoe is the fulcrum of an entire ecosystem. A versatile and rapacious plant, it is home to a number of invertebrates which are specially adapted to thrive on and around its surface” The Independent The last sighting of the Ghost Orchid (Epipogium aphyllum) was in Buckinghamshire back in 1986 and in 2005 it was declared extinct.  But amateur botanist sleuth Mark Jannink never gave up.  He runs a motorbike business for a living, but his passion is wild flowers, and last September his persistence paid off. END_OF_DOCUMENT_TOKEN_TO_BE_REPLACED

Some quarters, particularly the forestry sector, are reacting with indignation and protest. In these times of climate change, it is argued, surely woodlands should be preserved, not eliminated. But what the RSPB are doing in Farnham, Surrey, by felling the conifer plantations, is restoring heathland, an increasingly rare habitat in Britain. What’s more, they are lobbying the government to clear more non-native conifers, a move that would favour biodiversity and species such as the nightjar, woodlark, sand lizard and adder, which thrive in more open shrubby areas.

As project manager Mike Coates succinctly puts it, “It should be the right tree in the right place. A field of barley is a field of grass, but it’s not a meadow; it’s a crop. In the same way, these are areas of land dominated by trees, but they are not woods, they are crops.”  Photograph: Graham Turner  Guardian

An airy place to stretch your legs, Rodborough Common is perched steeply over Stroud, on the edge of the Cotswolds.  Any time of the year is good for extensive views of the Severn estuary and Welsh mountains on the horizon, but spring to summer are best, as the carefully managed chalk grassland is a haven for butterflies and wild flowers.  END_OF_DOCUMENT_TOKEN_TO_BE_REPLACED

A walk through a British wood may be delightful, but according to a new study in Proceedings of the Royal Society B, woodlands are becoming more similar, leading to an overall homogenization of the landscape. They are, in a word, becoming duller. END_OF_DOCUMENT_TOKEN_TO_BE_REPLACED

The Pre-Raphaelite Brotherhood scandalised the Victorians with their unconventional paintings.  But Ophelia by John Everett Millais was loved even when first completed in 1852.  It remains one of the most popular paintings in the Tate collection and the gallery’s best-selling postcard.

The Industrial Revolution was in full blast, bringing with it a new freedom of movement. Millais, one of the founders of the Brotherhood, would take the train out of London and paint nature as he saw it, not according to the fixed conventions taught at the Royal Academy. END_OF_DOCUMENT_TOKEN_TO_BE_REPLACED

In a plan to use one non-native species to combat another, DEFRA is considering releasing jumping lice to fight battle against Japanese knotweed. The non-native sap-sucking insect would be released under licence to tackle the weed, which causes serious damage to buildings, roads and railway lines; while driving out other plants; and eroding river banks. Knotweed was originally introduced as an ornamental plant the early 19th century. It now lives unfettered without predators in the countryside. The Indepedent

Japanese knotweed is often considered Britain’s most invasive plant species.DEFRA notes: “The species also causes problems in terms of flood management. It increases the risk of riverbank erosion when the dense growth of the plant dies back in the autumn exposing bare soil. It can also create a flooding hazard if the dead stems are washed into the streams and clog up the channel. A fragment of root as small as 0.8 grams can grow to form a new plant.” 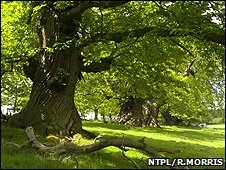 The National Trust is embarking on a comprehensive survey to identify previously unrecorded ancient trees on its land. The NT’s land holdings are huge – they include more than 25,000 hectares of woodland, 200,000 hectares of farmland and 135 landscape and deer parks.As many as 40,000 trees are to be classified. END_OF_DOCUMENT_TOKEN_TO_BE_REPLACED Anyone out of the country that week in October came back to find an altered landscape.  An estimated 15 million trees had been toppled, mainly in southern England, which bore the brunt of the hurricane-force winds.  The north of Britain is used to ferocious winds, but the south hadn’t experienced anything like it for nearly 300 years.  The result was a large population of very tall, old trees that had never been tested by such severe weather conditions. END_OF_DOCUMENT_TOKEN_TO_BE_REPLACED

Stinging nettles can give away secrets of our past. They have a strong association with human habitation and buildings. This is because our waste of refuse, ash and bones is rich in phosphate, which then builds up in the soil, and END_OF_DOCUMENT_TOKEN_TO_BE_REPLACED