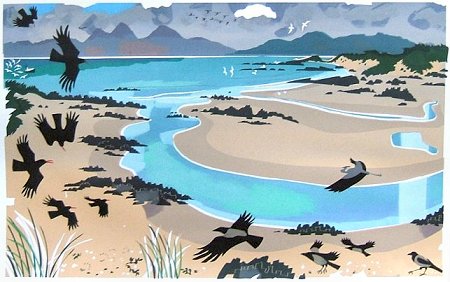 I’ve recently rediscovered the wonderful wildlife and landscape paintings by Carry Akroyd. The above work is entitled Colonsay, Oronsay, Islay & Jura, though most of her work is centred on rural England. Lots more of her work here at her website.

Popular opinion was never bothered by intellectual sneering and by 1880 the countryside of The Hay Wain (finished in 1821) was already being promoted as “Constable Country”.  Visitors ever since have been drawn to the banks of the River Stour, where Willy Lott’s cottage still stands (Grade 1 listed), so they can compare the view with the painting.  It’s reassuringly similar, though the river runs deeper these days, as East Anglia sinks. END_OF_DOCUMENT_TOKEN_TO_BE_REPLACED The area we now call the Lakes was once much wilder. END_OF_DOCUMENT_TOKEN_TO_BE_REPLACED Another painting by Sidney Richard Percy (1821 – 1886). This one is entitled Grizedale, Westmorland. END_OF_DOCUMENT_TOKEN_TO_BE_REPLACED

The management of London’s biggest park (790 acres/ 320 hectares) involves balancing recreational activities with nature conservation. Stressed out city dwellers can relax in a rural landscape, composed of a rich variety of habitats, including meadows, where grass is allowed to grow long to favour butterflies, and woodlands, where all three of Britain’s woodpeckers nest.  Outdoor swimming is a popular activity on the Heath, while by one of the 25 ponds a bank has been constructed to encourage kingfishers to breed.  Up on Parliament Hill kite-fliers enjoy spectacular views of London and might also see Kestrels and Sparrowhawks hunting.

Encouraging respectful attitudes from the wide range of visitors is an important part of looking after the Heath.  There is a particular problem with the amount of rubbish left behind by night-time pleasure-seekers in West Heath, for example, famed as a safe cruising zone. The “Heath & Hampstead Society” proposes the following:

“The Society is . . . working with the City to come up with new ways to manage the problem, for example, putting solar lamps in trees to power flashing beacons on litter bins during the night.”

Is it possible to do anything new in the twenty-first century in landscape painting? Although most of the art world has given up painting hills, fields and trees, David Hockney doesn’t agree and returned to his native Yorkshire to paint a series of works of the countryside he knew as a child and teenager.

In Europe, the idea grew that painting was finished, not needed. This is because it had been replaced by something – the photograph – the pencil of nature, the truth itself. This assumes photography is modern; at least it’s only 180 years old. If one rejects the “immaculate conception” theory of photography – it came from nowhere, about 1839 – one begins to see another history. David Hockney