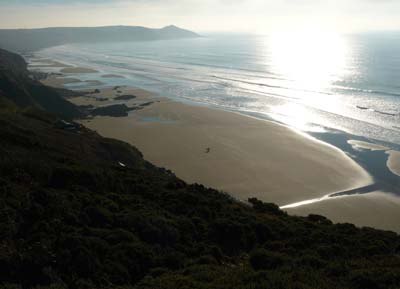 END_OF_DOCUMENT_TOKEN_TO_BE_REPLACED

In August 1802, poet, scholar and journalist Samuel Taylor Coleridge set off on a tough 9-day walking and climbing tour of the Lake District, which would include Scafell, the second highest peak in England.  It’s interesting to see how he went equipped. For a walking stick he dismantled a broom, to the annoyance of his wife. His knapsack was made of a square of green oilskin, closed by string, and inside

. . . he carried a spare shirt, stockings, cravat, and night-cap (which seems to have been Coleridge’s equivalent of a sleeping bag), together with paper twists of tea and sugar, his Notebook, and half a dozen quills with a portable inkwell.”  – Early Visions by Richard Holmes

Coleridge is said to be the first “outsider” to climb Scafell and his descent is hailed as the first ever recreational rock climb.  It was a memorable piece of improvisation. Threatened by an approaching storm, he chose a way down, without any idea of what lay below.  He found himself descending a series of ledges, a kind of giant’s staircase, known today as Broad Stand. As the ledges grew further apart, he lowered himself over them and let himself drop.  The succession of jolts soon “put my whole Limbs in a Tremble, and  . . . I began to suspect that I ought not to go on . . ” END_OF_DOCUMENT_TOKEN_TO_BE_REPLACED

The 87 mile-long Ridgeway National Trail is remarkable in being the oldest road in Britain and because you can still walk it, following the same route used since prehistoric times by travellers and, herdsmen.  The route connects the Dorset and Norfolk coasts, passing over rolling, open downland to the west of the River Thames, and through secluded valleys and woods in The Chilterns to the east. It is littered with historical sites dating back to the iron age. Lots of details from the National Trail website here.

A contender for this title is the 6-mile Bath Skyline walk, the most frequently downloaded trail from the National Trust webpage.  The National Trust owns 500 acres of land at the edge of the city, only a mile from the centre.  Safe from urban development, the land is a mix of woodland and meadows, rich in wildlife and flowers, with views of the famous Bath stone terraces in the valley below.

Yowie snowshoes were designed, fittingly, in Australia.  They look like beach sandals attached to rubber flippers with a deep hexagonal tread and metal cleats.  Extremely versatile and user-friendly, once you’re strapped in, with body weight nicely spread out to avoid sinking, you can enjoy  snow walks on the flat or more challenging treks up and down mountains.  The material reportedly offers better insulation from the cold than more conventional heavy-duty snowshoes. They are also lighter, cheaper and easier to stow in your ruck sack.

Another idea is to use ice grips – unobtrusive devices you can attach to your usual footwear to radically increase traction on slippery surfaces.

One of the pleasures of walking is knowing the history of your path, why it exists and who walked there before.

The need for Corpse Roads disappeared centuries ago, though a few are still known by that name.  When population was low and villages were widely scattered, the nearest consecrated ground could be miles away, across harsh and inhospitable terrain.  Sometimes coffins had to be abandoned in blizzards, miles from anywhere.  When weather improved, they would be picked up and the journey resumed.   Coffin-bearing horses bolted with fright during storms, never to be seen again, but living on in legends and ghost stories. END_OF_DOCUMENT_TOKEN_TO_BE_REPLACED 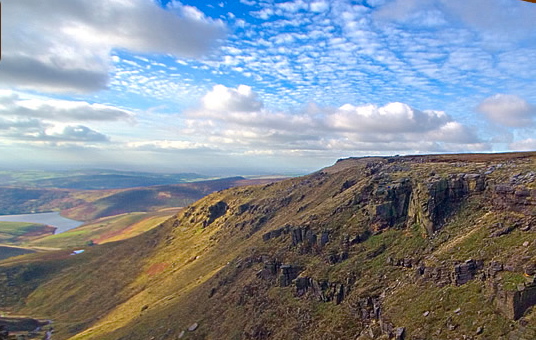 But 70 years ago, Kinder Scout was a private moor reserved for grouse shooting. And the famous demonstration, organised by the British Workers Sport Federation, was very much part of the 1930s class war. The confrontation with police and game keepers on the one side and a mixed group of communists, students and ramblers on the other resulted in scuffles, arrests and prison sentences. In his statement at the dock, Bernard Rothman, one of the organisers, argued their case: END_OF_DOCUMENT_TOKEN_TO_BE_REPLACED

Apparantly it is best not to throw away bananas on hikes as they can take up to two years to biodegrade. The John Muir Trust, which protects many of Scotland’s wild places, estimates that there are now 1,000 banana skins strewn across Ben Nevis alone. But at least they aren’t as bad as chewing gum.

The Guardian has put together this excellent interactive map of its compendium of some the best walks in Britain. everything from Bronze age Perthshire and the beauty of Ullswater to the Watership Down warren! Here Hadrian’s Wall Path National Trail is an unbroken 84 mile signposted trail stretching from coast to coast, from Bowness-on-Solway in the west to Wallsend in the east. It passes through some of the most beautiful parts of England – from rolling fields and rugged moorland to the vibrant cities of Newcastle and Carlisle. These holidays follow the trail and enable you to see the beautiful countryside and experience the culture as well as discover the history of this remote part of the country. Visit

An airy place to stretch your legs, Rodborough Common is perched steeply over Stroud, on the edge of the Cotswolds.  Any time of the year is good for extensive views of the Severn estuary and Welsh mountains on the horizon, but spring to summer are best, as the carefully managed chalk grassland is a haven for butterflies and wild flowers.  END_OF_DOCUMENT_TOKEN_TO_BE_REPLACED

Originally a path for coastguards on the lookout for smugglers, the South West Coast trail is now Britain’s longest waymarked footpath.  As highlighted by the Marine and Coastal Access Bill, soon to be debated in Parliament, this is the most accessible part of the English coast.  The 630-mile trail between Minehead and Poole harbour is only interrupted by ferry crossings across river estuaries.  Check out the official guide. 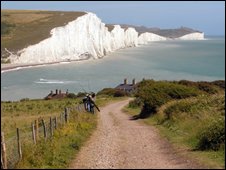 Almost a thousand miles of new coastal paths will be created if the Marine and Coastal Access Bill is passed by Parliament this autumn.  Natural England, the government’s advisor on the environment, report that “On average you cannot walk further than two miles [on the English coast] without reaching an area of unsecure access or having to turn back.”   There is some opposition to the Bill, mainly from private landowners who don’t want ramblers on their property. Read more in the BBC

The Times has compiled a list of the 100 best walks in the UK.  Lots of ideas, divided into regions.

Since Britain’s weather doesn’t always encourage sunbathing on the beach, an alternative way to enjoy the sea is walking near it. Yet another handy list from The Guardian covers  10 of the country’s best coastal walks.  Most aren’t longer than 6 – 8 miles, realistically taking into account the tempting distractions you might come across, including rock pools, fossils, windmills and seals.  The walks reflect the variety of Britain’s coastal landscapes, such as the vertiginous cliffs of Beachy Head and the eternal sands of Holkham, as well as a section of the Pembrokeshire Coastal Path.

The list was put together by Martin Wainwright, author of The Coast to Coast Walk.  Read in the Guardian