This is a rather nice static webcam by the RSPB from Abernethy Forest in Scotland. Lots of red squirrels and birds such as crested tits and siskins come to feed at the table. The image refreshes every two minutes.

Here’s a short video by the Scottish Beaver Trust showing the moment when beavers were released in Knapdale Forest two months ago, and took their first wild steps in Britain for some 400 years. 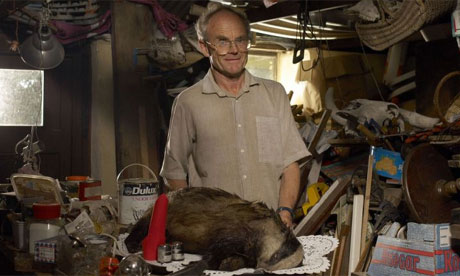 This BBC documentary is entitled The Man Who Eats Badgers and Other Strange Tales from Bodmin Moor about Arthur Boyt, a retired civil servant, who collects and eats roadkill. Mr Boyt’s freezer is brimming with badgers, barn owls, dogs, cats, otters and foxes. But this is much more than a tale about strange eating habits. It is a portrayal of a small, isolated community on a bleak Cornish moor told through superbly shot filming and an intelligent script full of pathos.
END_OF_DOCUMENT_TOKEN_TO_BE_REPLACED

Short BBC video here of a group of stoat kits eating and playing in a garden. Note the black tips on their tail. Weasels don’t have these.

Rather nice video here of a cheeky Pine Marten near Loch Ness. END_OF_DOCUMENT_TOKEN_TO_BE_REPLACED