The British Deer Society estimates that annually as many as 75,000 deer are involved in collisions, causing ten human fatalities and many more injuries. BBC here

A key reason for the dramatic decline in England’s nightingales is the rise in the deer population, particularly the small muntjac, a prolific all-year breeder.  By eating their way through the understorey of woodland, deer effectively destroy the nightingales’ habitat.

Between 1994 and 2007, nightingale numbers in England – the bird is absent from Scotland and Wales – dropped by 60 per cent, and its range shrank towards the South-east, with concentrations limited to Kent, Sussex, Essex, Suffolk and Norfolk. 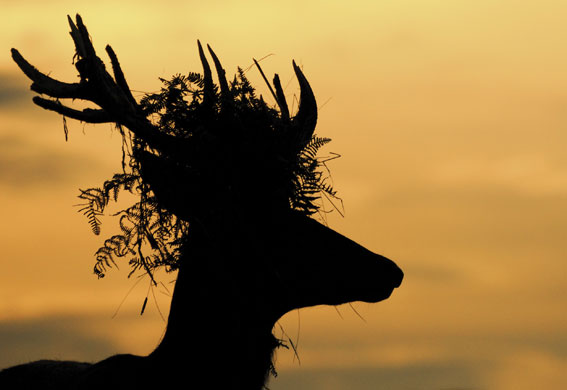 Among the winning entries of the Veolia Environment wildlife photography competition is this image of a rutting stag in London’s Richmond Park.  The stag was rubbing his antlers free of velvet and had picked up a crown of bracken, silhouetted here against the dawn sky. Photographer Sam Rowley was able to approach quite close to his subject since the deer in Richmond Park are quite tolerant of people.  Visit the Guardian to see more photographs and BBC article

The largest mammal in Britain is, according to the Daily Telegraph, the Exmoor Emperor, a 300lb, 9ft red deer stag,  a “truly magnificent” example of the species. The deer on Exmoor are among the biggest in the country. Red deer – Britain’s largest land mammals – are at their most impressive during the autumn rut, when they advertise their power by prolonged roaring. There are many places to watch and listen to this natural spectacle, but perhaps the most accessible is Richmond Park in southwest London. END_OF_DOCUMENT_TOKEN_TO_BE_REPLACED

A red deer stag stands with its powerful neck raised, antlers filling the sky. In the background mists swirl over the Scottish Highlands. The Monarch of the Glen was painted in 1851 by Sir Edwin Landseer, a star in his own time.  Animals were his speciality, both in painting and sculpture – the lions at the base of Nelson’s Column in Trafalgar square are his.  Emotive portraits of animals went down very well with the Victorian public, crossing the class divide.  Queen Victoria had Landseer paint her pets, while the middle classes bought prints of his work to hang at home. END_OF_DOCUMENT_TOKEN_TO_BE_REPLACED